Jack of None (english version) 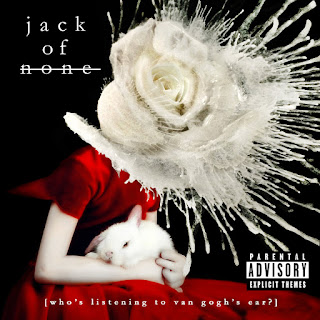 This time in englisch - thanks alot to Alissa Wyrdguth for translation.

THE SHAGGS were that kind of band. So was YOUTH BRIGADE. So were those black proto-punks DEATH, and the Mmmmbop teenies HANSON . The kind of band you might file under “three siblings”. If you can really think of no other way to arrange your record collection.

If so, this is where you might file JACK OF NONE“who’s listening to van gogh’s ear?” arrived here at headquarters some weeks ago. The siblings in question are A.G., Maxine and Julian Syjuco, children of avant garde artists Cesare and Jean-Marie Syjuco who have been really well known in the Philippine art scene for many years.

Well my daily life seldom brings me across either Philippine avant garde artists or their children. But JACK OF NONE’s record got me right away. Not the sibling thing, not the exotic thing – hey, it’s 2016 and one of those effects of globalization, Eurocentric as it may be, is that pop has got absolutely everywhere, into what we used to think of as the last corners of the earth. And they are playing it right back at us. Anyone been wondering lately what is happening in punk in the Philippines? You might a) get on the net and find a lot of links for Pinoy Punk or b) ask expert Mika of Alleiner Thread zine who knows all about it or c) re-listen the SUBCULT RADIO SHOW on the topic – but I am digressing.

JACK OF NONE have little to do with straight punk rock. I’d rather put them close to early wave and post punk, with their cool vibes and ambivalence. Which makes them the more interesting to me. Whatever I expected, it wasn’t the sound track to a David Lynch movie that’s never been made.

They go easy on us at first. “Hotel Carcass” opens with a loose, loungy bass line and adds a cryptic spoken word thing. When this started dripping from my amps one sweaty summer night, I thought of some southeastern version of NOUVELLE VAGUE. Without covers. Which might be charming, I thought, wiping my brows.

It gets less catchy then, but that makes it more exciting. Those slightly brittle Filipinos do experimental things with electro, alternative rock and industrial. Across all that they sometimes put a metal guitar which wouldn’t be out of place with Rammstein or Marilyn Manson. Adding to confusion or rather to variety, although fitting the whole, is singer Maxine’s voice. She is putting it through enough effects to make it sound like Apple’s Siri on acid. Possibly the sound engineer has had a little too much fun on the voice tracks, but nevermind.

(E) for Exotic bonus up my ass (this is a good thing) on the 26-step scale of renfield appreciation.