Line-Up for the Renfield-Fest complete!!! 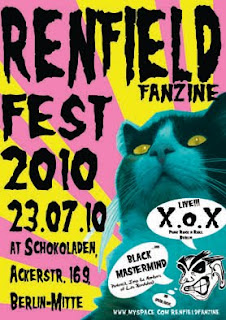 Yes, I know, everyone of you soccer-zombies out there has only one more thought in his brain for the next week. I think you even have to remind yourself of breathing because every minute is filled with soccer, football, Fußbal, fussek, Vuvuzela drone metal and goals, goals, goals.

Actually I like the soccer championship more than daily Bundesliga-life, but the second day of it has just started and I am already a bit exhausted. Exhausted of the flood of places that offer their public viewing. THEY ARE EVERYWHERE! And despite of this, we never know where to watch a game. Are unable to make a decision for one location. I think I won't sit down anywhere, but just walking from one pub to the next, always catching one look to the results. Will I miss something? No,I don't think so. My soccer championship happens on the streets, I guess.
Even if is the WM is in Güney Afrika, you get the impression it happens again right here and right now.

And if I meet one other person that says: "Uh, this Vuvuzelasund is soooo annoying, I really can't stand it anymore, blabla" - then I will play a whole RIchard-Wagner-Opera onyl with Vuvuzela-instrumentation directly in his or her ear and stick the thing after it to hisass. Or her ass. I am equal to all genders. Don't want to hear anymore rants about Vuvuzela-tooo-lod here and Vuvuzela-destroys-the-party-atmosphere-there-blabla. "Et is wie et is" (It is like it is) - one of the basic laws in Cologne, is still valid. And at the moment it is loud. and humming. In south africa, on your TV, at the Championship. That's the way the cookie crumbles. These Vuvuzela are more Grindcore than Napalm death. Great shit, really. Accept it.


Ok, now for the REALLY good news: We got the final line-up for the Renfield-Fest on 23rd of July at Schokoladen in Berlin!

Aditional to those hard-rockin'guys of X.o.X.
we got Jena's one and only Punkrock-heroes BLACK MASTERMIND, whose drummer Sven some of you mighgt know from the legendary Surf-Aces LOS BANDITOS.
But you should never start a good party without a small aperitif and in case of the RENFIELD-Fanzine it means, that GARY FLANELL & the amazing ELLA CHORD will open the evening with a small bunch of charming covers, only performed with Guitar and voice.And of course you can get the No.22 of Renfield-Fanzine at our party for the first time!


So, that's it. Just half an hour till the next Vuvuzela-Synphony. So I have to stop here, find a bar with a big screen and nice waitresses. Who's actually playing?
Ah, doesn't matter.