New Renfield-Zine out now! Let's call it No. 22 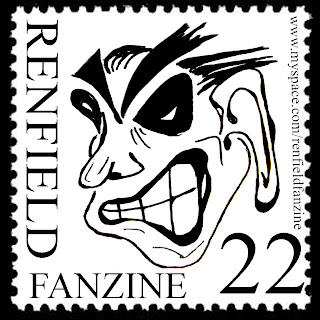 Actually, I can't say anything more than the headline. Sorry for that, folks.


Ok, I'll tell you a bit more. In July we got the really amazing Release-Party ofRenfield No. 22. It was our first time in Schokoladen in Berlin-Mitte, and I was surprised how good everything worked out there. Thanks a lot to Ralf who took care of really everything around the evening. And as I got some strange experiences on self-organized gigs, I appreciate this much more. Hope we will do it next time again there.

Although we got a smaller line-up than last years party, the whole event got the same energy. One of the things I recognized from our West Germany party was definitely this: You don't need 5 bands on one evening, when the last one just plays for an audience of five exhausted und drunk people.

So we got three bands this time. Still enough to watch and celebrate. Is there actually the same old speech in english like in german? This "Less is more"-Thing? Whatever. You understand it.

So we got three bands and I can say , at least two of them rocked like hell. I don't want to talk too much about Gary Flanell & Ella Chord. How should I judge my own gig, ha? For an opening act as a a warm-up for the following bands, it was good for Ella and me to start with some cover versions from Billy Bragg to Shelter to Johnny Cash to the Get Up-Kids and of course our one and only self-written No.1-Hit "Cats sleep everywhere". Just Ellas amazing voice and me strumming some chords was fun for us and hopefully the audience, too. I really liked the sound of the Black Mastermind Amp. Hope I can find a similar one on following gigs.

Second band were Black Mastermind from Jena. Before I booked them I just got a Live-Bootleg-CD, the Sound was not that good, but I relieved on the recommendation of Susan (who did a very good press job, thanks for that and welcome to the Renfield-Crew) of this band from her hometown and I have to say: Holy shit, really good, loud and energy-driven band. If you name your band after a Monster-Magnet-Song there have to be some Stoner-Influences and of course there were some. Did I say some? No, a lot! Thanks to you guys!

Actually this was the evening of the 3- or- 2-man/woman-bands. That shows, that you don't need a whole orchestra to make a good gig. X.o.X. are the best example for that. 3 guys, all eager to play loud, simple but fast Punkrock with the pronunciation on R.O.C.K. 3 guys, that's all and that's enough and all songs played straight to the point. No need for a 2nd guitarist or a simple singer. It is so concentrated and that's the point. If you want more people on stage, go and watch the Fischer Choir. This is not a rock opera. I always compare them to Danko Jones and I will do it again. But, I hope Danko will forgive me, these guys are better. Uh, lots of stuff to discuss. I saw them a few weeks later in K17, when they were playing at 8 o'clock in the evening (unbelievable) for 20 people, but the gig at the Schokoladen was a million years better. Perhaps these guys deploy their real energy just in small places with a mximum audience of a hundred people. I will observe this.

So, let's draw the conclusion: The birthparty for Renfield-Fanzine No.22 was a good one. Hopefully, there will be many more.
Let's now have a look, what's inside of our new Zine.
We got Interview with

- a feature of israelic Industrial/Noise/Hardcore/Label Heart and Crossbone rec. from Tel Aviv

- DYSE (there has to be a Metal umlaut on the Y, this is even something you won't find in Germany), one of the most interesting german Noise-bands

- 2nd part of the Interview with Gerrit from PVC

- SeiltänzerTrauma - charming Lo-Fi-Country-Garage-Trash from Southwest germany. If Billy Childish would have grown up in Rhineland-Palatinate, he would sound like this.

- E-Aldi - when a punk starts to make electronic music, he's still a punk. So E-Aldi does. On his 7th (!) album, E-Album pays tribute to one of the most famous german Punkbands ever and covers the complete "Alle gegen Alle"-Lp of SLIME - completely in an electronic trashy sound. What would fit better to the Renfield-Zine.

So that's it for the music part. Beside of this we also got lots of short stories, columns, poems, record reviews on this 64 sides of the "Fachorgan of Krims&Krams& Rock'n'Roll".

If you 'd like to get your personal issue of Renfield No. 22, just write a short mail to renfield-fanzine@hotmail.de and we will make out what has to be made out.