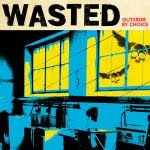 Bite it U scum - a tribute to G.G. Allin 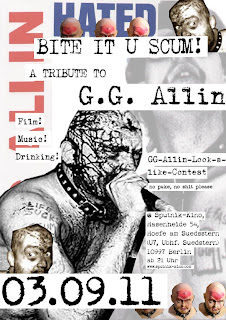 What happened on August the 29th in the year 1956? Don't know? Come on, it's not that difficult. On this sunny day at the end of summer 1956, in the middle of the cold war, a star was born. And guess what? I bet, you know which star I am talking about. Of course, I think there are many people who'd like to discuss if G.G. ALiin was a rockstar or just an asshole.
I think he was not that kind of star like let's say Michael Jackson, Rihanna or Patrick Swayze, but if we talk here about Patrick Swayze, we have to say that G.G. REALLY was the one who invented the real DIRTY DANCING literally on stage.
Maybe G.G. was really a psycho, maybe his appearance was just the result of an overdosed religious education in a so-called western civilization or maybe he was just a narciss that tried to get attention in the most extreme way - there are many people that have been really impressed by what he did in all his consequences. Me, too.
I don't tell you groundbreaking news, if I say that G.G. was a big influence for doing the RENFIELD-Fanzine and getting into punkrock - I even remember that we covered "Don't talk to me" with one of my first bands.
And as G.G. would have celebrated his 55th birthday this year, it is a real reason to pay a tribute to one of the most respectable guys in Rock'n'Roll-History with music, Film, drinking and a G.G.-Allin-Look-a-like-contest (but PLEASE dear candidates: please do not puke or shit or whatever into the cinema!).